At the Islamic Center of Murfreesboro, bacon strips were wrapped around the door, and expletive-laden graffiti was written on walls and the basketball court.

It seemed that the vandals also tried to spell out something in bacon, but Sbenaty said the message wasn’t readable because animals had taken some of the meat.

Muslims do not eat pork.

The mosque opened in August 2012, after vandalism, arson and a bomb threat had beset its planning and construction.

To stand against hatred, the mosque leaders will hold a community gathering Tuesday at the house of worship, Sbenaty said.

The Council on American-Islamic Relations (CAIR), the nation’s largest Muslim civil rights and advocacy organization, called for a hate-crime investigation.

CAIR urged President Donald Trump to speak out against the rise of Islamophobia and anti-Muslim incidents across the country.

This year, CAIR has called for investigations of possible bias motives for dozens of other incidents targeting mosques in Colorado, Florida, Ohio, Iowa and other states, said CAIR official Corey Saylor. 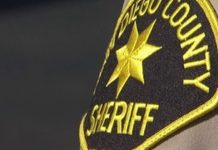