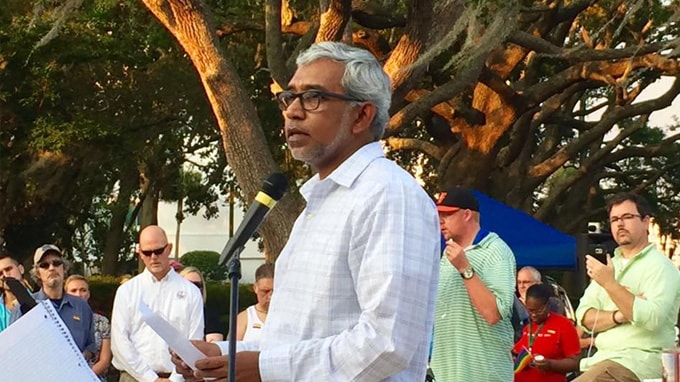 “The fact that it took place at a club frequented by the LGBT community I think is also relevant,” said President Obama after the unspeakable tragedy in Orlando, when a gunman killed 49 people and injured 53, the worst mass shooting in U.S. history. The identity of the victim has been either dimly acknowledged or not acknowledged by two groups – Republican leaders and Muslim imams.

The pattern of many GOP politicians muting the identity of the victims is in sharp contrast to their dogged attacks on anyone, particularly President Obama, for not mentioning the “Islamic” identity of the perpetrator. By one report, not a single congressional Republican who tweeted about the Orlando shooting mentioned the obvious identity of the victims. Neither has the Rick Scott, the Governor of Florida where the shooting took place. Many, if not most, GOP leaders have spent their political careers fighting to deny LGBT people their due civil rights. Sympathizing with the people they have been bashing is a bridge too far for many.

Muslim imams and scholars, in general, have condemned the mass shootings in Orlando. But I am struggling to find even one who acknowledged the identities of the victims. Noted scholar Yasir Qadhi on Facebook talked at length about the unfair expectations levied on the Muslim community, which he defines as “the problem of being a minority under pressure.” But conspicuously missing from his post was any mention of the actual victims of this tragedy. This is especially troubling because what unfolded in Orlando serves as a potent reminder that the LGBT community is also a minority group “under pressure.” They too are imperiled by the unjust treatment of minorities that Qadhi is denouncing. In foregrounding the menace that is Islamophobia and brushing past the salient reality of homophobia, Qadhi ignores the bitter truth of why this tragedy happened in the first place. Another leader, Zaid Shakir, who just a few days ago led the memorial services for Muhammad Ali who strove mightily for the human dignity of all people, in his Facebook post failed to condemn the bigotry or spare a single sentiment of solidarity with the only subgroup in America who today suffers from legalized discrimination.

Not naming the primary identity of the victims that led to violence against them is not just an omission; it adds to the oppression. Erasing their identities from the narrative reinforces a bigoted society’s desire to erase their existence. It is as callous as saying that 9-11 is an act against all humanity while discounting the fact that Americans were targeted simply because of who they are. Or saying that the murder of three Muslim students in North Carolina was just another mass murder when it was obvious that the identity of the victims played an important role in their deaths.

Tragedies are often crossroads of choice. We can allow ourselves to retreat into the comforts of our preconceptions. Or we can question the norm and seek to carve a better path. In Orlando, the Muslim community chose the latter. They rallied not only to distance themselves from the ideology of the perpetrator but more importantly, to express solidarity with the LGBT community. Muslim groups banded together in a coalition to raise funds for the victims and have pledged to handover those funds to Equality Florida, a pro-LGBT group. Last time I checked, their efforts have raised over $44,000 from 980 supporters.

In a recent interview on CNN, a local Muslim leader Rasha Mubarak, underscored camaraderie between the Muslim and LGBT communities while sending her heartfelt condolences to the families and loved ones of those killed or injured. And yet, the group she represents, CAIR, has been notably silent on the many initiatives for LGBT rights, from marriage equality nationally to civil rights protections for LGBT people in local human rights ordinances. Groups who demand equal accommodation of Muslims at workplaces do not yet have policies protecting against the discrimination of LGBT people in their own organizations, oblivious of the civil rights of LGBT Muslims.

In the face of violence in the name of Islam by deranged lone wolves and the demonization of Muslims by unhinged demagogues, American Muslims will continue to struggle against Islamophobia. In this struggle, the LGBT community will remain a valuable ally. Many LGBT leaders have courageously reminded people that in their moment of anger and anguish they should not turn against Muslims, who are, in a smaller way, also victims of this tragedy.

And yet, Muslim leaders have shown a shocking indifference to LGBT rights. LGBT Muslims are often shunned at local mosques. Pressure is put on them to “convert” away from their natural homosexuality. American Islam has to be rooted in American pluralism. American Muslim communities have to find their own voice and, as the stories surfacing from Orlando highlight, in many cases they are. I hope that the tragedy at Pulse compels the rest of the community to recognize that we must serve as partners and allies with all Americans in our common struggle for equality. We must embrace our common humanity.