(The following opinion piece was published in al-Bawaba: The Middle East Gateway on April 15, 2004, and has long been removed from the newspaper’s archives. It was supposed to be included in Islamic Insights: Writings and Reviews, an anthology of Dr. John Andrew Morrow’s journalism, published by Ansariyan Publications in 2010; however, it was excluded due to the fact that it did not meet the approval of Iran’s Ministry of Culture. The position of the Islamic Republic of Iran was to support armed struggle as opposed to non-violence and diplomacy. As the 2018 developments in Gaza demonstrate, many Palestinian people have developed greater political maturity over the past decade and a half and are now engaging in more effective methods of opposition that are far more likely to inspire sympathy as opposed to terrorist actions committed against civilians.)

After over 50 years of struggle, the time has come for Palestinians to make a strategic shift in their struggle, break the impasse, and move from the bullet to the ballot. Rather than fighting for a fractured Palestinian state, Palestinians should demand their rights as citizens of the single state of “Israel/Palestine” and wage their battle through the ballot.

In the Palestinian context, the path of violence has been proven ineffective and incapable of leading to a lasting solution. Moreover, the military destruction of Israel is an unrealistic ambition. The Arabs do not have the might to defeat Israel. Not only does Israel have the most powerful army in the Middle East, it is a nuclear power under the protection of the most of the Western world. If the recent history of the Palestinian problem has taught us anything is that it cannot be resolved by force. Both Israelis and Palestinians have cornered themselves into untenable ideological trenches engendering an unending spiral of violence and suffering. It is time for both parties to start from scratch and come up with a more creative compromise: the creation of a liberal secular democratic state where all people, Jews, Christians and Muslims, are equal before the law and can coexist in freedom, mutual respect, peace and harmony. This single state, which would certainly be supported by the immense majority of the world population, may be the only viable solution to the Palestinian problem and the only approach that can bring peace to Israel and Palestine.

Both sides will scream “sell-out.” The Zionists will insist on the concept of a Jewish state purged of Palestinians. The Arab nationalists will continue to demand their tiny piece of leftover pie when they can actually have the whole pie and eat it too. Islamists will demand the destruction of Israel and the creation of an “Islamic” state purged of Jews. Clearly, these positions have no place in a pluralistic society and can only lead to death, destruction and mayhem. Zionism is not palatable to Arabs. Arab nationalism is not palatable to Jews. And Islamic fundamentalism is not palatable to either. While Palestinians may empathize with the despair that leads young men and women of Hamas and Islamic Jihad to perform “martyrdom operations,” they certainly would not want to be ruled by them. Unlike other Arabs who seem content with more or less dictatorial governments, the vast majority of Palestinians want a liberal democracy not unlike the one in Israel, minus the human rights abuses. Muslim activists will denounce such a strategy as an implicit or even explicit recognition of the state of Israel which it certainly is not. It is recognition that Israel is Palestine, that Palestine is Israel, that the land is one and should remain one. Call it Israel, call it Palestine, call it the Federation of Israel and Palestine, call it what you wish, it is one nation that should join the distinct international organizations of the region. Change its name if you wish, it remains the same. Scattered in the West Bank, Gaza, and Israel, Palestinians must resign themselves to lack of influence, lack of territory, lack of recognition, lack of nationhood and lack of rights. If they demand the vote of Israel, are represented by population, their impact would be decisive.

Israel has a population of 6,116,533 inhabitants, 20% of which are Palestinians. If we add these 1,223,306 Arab Israelis to the 3.5 million Palestinians living in the occupied territories we come up with a figure of over 4.7 million Palestinian Muslims and Christians along with 4.9 million Jewish Israelis. Instead of destroying “Israel,” Palestinians can easily coexist with Jews, Christians, atheists, polytheists, etc., in the same country. If the Palestinians demand the vote, the Israelis will be hard pressed to grant it to them. If they fail to do so, they will place themselves in the position of American segregationists and South African supremacists who denied the vote to blacks. If the Palestinians demand the vote, and the Israelis refuse to respect their rights, world public opinion will turn increasingly against the Israelis. The Palestinian struggle would immediately be viewed as a struggle for universal human and civil rights. They can turn to marches, demonstrations and sit-ins demanding their right to vote. They can make the choice clear to Israelis: “The Ballot or the Bullet.” If the Israelis decide to repress the democratic movement it would be to their own downfall, for in that case the Palestinians could move from a localized intifada to a full-blown civil war against an apartheid regime. The repression of Palestinians who wish to co-exist with Jews in a pluralistic democratic state would lead to widespread censure of Israel as well as economic boycotts as was the case with South Africa. Palestinians need to think strategy and to change strategy. While the suicide bombings of civilians and the blowing up of babies has done little to boost support and solidarity for the Palestinian cause, turning from the bullet to the ballot can change the course of history. And if the Palestinians are the ones who cannot accept or understand the need for adopting a new strategy, then it will only lead to endless bloodshed without any possibility of changing the course of events. And Allah knows best. 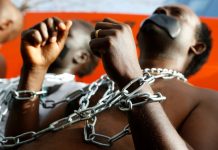