Siraj Wahhaj said his daughter sent the message to a man in Atlanta who passed it on to him.

“What I do? I said, ‘Find out where to send the food,'” the prominent New York imam told reporters Thursday.

As soon as they learned the location, they shared it with police, Wahhaj said, prompting the raid of a New Mexico compound where 11 malnourished children were found on August 3. Nine of them were the imam’s “biological grandchildren,” he said Thursday.

The missing boy for whom authorities were searching — a child of the imam’s son — was not found in the raid.

“That’s why the police came in, because of information that we gave them,” the imam said in his first public comments since his son, also named Siarj Wahhaj, and two daughters were arrested in last week’s raid with two other adults. 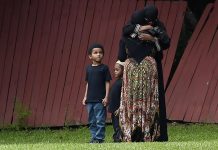 Mom of Boy Found Dead in New Mexico: ‘my Baby Is in a High Place’