The Federal Bureau of Investigation on Tuesday released a large cache of documents compiled on the Trump Organization.

The FBI released the documents after a Freedom of Information Act request and was heavily redacted and difficult to read.

Page 108 is not redacted, but not easy to read.

It features a 1997 newspaper clip from the Standard Star in New Rochelle, a city in Westchester County, New York.

At the time, Westchester County was represented by District Attorney Jeanine Pirro, who was running for reelection.

Pirro’s husband, Al, was at the time representing Trump in a bid to build a golf course in the county.

“The campaign also paid Trump just $250 to rent the sprawling mansion for the evening, ” the Standard Star reported. “State regulations require the disclosure of any gifts made to a campaign if a candidate doesn’t pay fair-market value for the service.

The Trump Organization disputed that the low rent fee was a gift to Pirro’s reelection campaign, saying the mansion was in bad shape.

“We are very grateful to them for getting Seven Springs in good condition,” Trump Organization spokesperson Norma Foerderer told the newspaper. “We got the strong end of the deal.”

With the two preceding pages entirely redacted, it is difficult to know the context for why the FBI was interested in Trump’s possible campaign finance violation with Pirro.

The next page is about an unrelated report of a death threat received by somebody who had not approved a tax abatement for Trump. 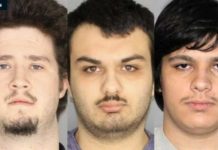