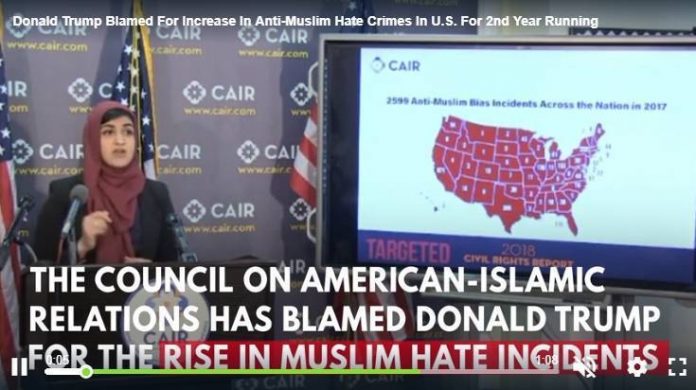 A segmant aired by an Odessa, Texas, news program was the subject of sharp criticism online Friday after some viewers accused the newscast of promoting “Islamophobia” and anti-Muslim biases.

KOSA-TV, a CBS affiliate owned by Gray Television, ran a story this week about an event where two white European women—Katie Hopkins of England and Elisabeth Sabaditsch-Wolff of Sweden—spoke before the Midland County Women’s Republican Club.

At the event, according to the report, Hopkins and Sabaditsch-Wolff addressed how they believed Muslim immigration has affected their countries and how it could impact American citizens as well.

“Many in the audience were surprised with their personal accounts of how Muslim immigration is impacting them and changing the landscape of their country,” the KOSA reporter said about the event. “Hopkins said she was the target of a Jihadist plot to behead her after speaking out about how the country’s accommodation has citizens coming under fire for the things they speak in public and online and believe, in general.”

The clip featured a one-on-one interview with Hopkins speaking about Muslim immigrants’ growing presence in London. She said the English city is “completely overrun by migrants that didn’t come from that place.” Hopkins cited examples of people speaking on Muslim immigration and the repercussions they suffered for doing so, including a man she claims was arrested and accused of Islamophobia for “preaching” the Christian bible in the streets. Hopkins suggested opposers to the growing Muslim population in England face “repression of freedom for even thinking” such thoughts about the shift.

Within Breland’s thread, he noted that Sabaditsch-Wolff “was convicted of hate speech in Austria in 2011, which CBS7 doesn’t ever think to mention.” He also shared a link to the March 25 event’s Eventbrite listing, which claimed that “Jews and Christians have been forced out of beloved areas” and “Halal food is being served in public schools.”

Breland’s tweet was shared by Huffington Post Editor-in-Chief Lydia Polgreen. For their part, Polgren wrote: “Local TV news is one of the most trusted forms of media. This local news clip is shocking.”

Yashar Ali, a HuffPost contributor, also shared Breland’s initial tweet. He called KOSA’s story a “despicable segment” and argued that “it amplifies islamophobia because the topic was covered uncritically.” He also called out the reporter directly by suggesting she should “be ashamed of herself.”

This article originally appeared on newsweek.com