“The Jews of the Islamic world were not restricted in this way. Like Christians, they were accorded the status of dhimmi (protected minority), which gave them civil and military protection, as long as they respected the law and supremacy of the Islamic state. The Jews of Islam were not persecuted… they were given full religious liberty, were able to run their affairs according to their laws, and were more able than the Jews of Europe to participate in mainstream culture and commerce.” Karen Armstrong, Islam: A Short History

“Discussing the conditions under which Jews and Christians could remain on Muslim soil and be considered part of the community, Muhammad added: “He who wrongs a Jew or a Christian will have me as his accuser.” Again and again, he recommended this tolerance toward the faith which so resembled his own. In all his treaties with Christians he invariably guaranteed their liberty of worship.” R.V.C. Bodley, The Messenger

The Text of the Covenant

In the Name of [Allah], the Most Compassionate, the Most Merciful.

This is a letter from Muhammad, the Messenger of Allah, to Haninah and the people of Khaybar and Maqna and their progeny as long as the heavens are above the earth, peace. I praise unto you Allah, save whom there is no god but He.

Now [I say that] he has revealed unto me that you are about to return to your cities and to the inhabitants of your dwelling-place. Return in safety, in the protection of Allah and that of his Messenger.

Yours is the safeguard of Allah and that of his Messenger with regard to your persons, belief, and property, slaves, and whatever is in your possession. You shall not have the annoyance of land-tax, nor shall a forelock of yours be cut off.

No army shall tread on your soil, nor shall you be assembled [for military service], nor shall tithes be imposed on you, neither shall you be injured in any way. No one shall leave his mark on you, you shall not be prevented from wearing slashed or colored garments, nor from riding on horseback, nor from carrying any kind of arms.

If anyone attacks you, fight him, and if he is killed in the war against you, none of you shall be executed for his sake nor is ransom to be paid for him. If one of you kill a Muslim intentionally, he shall be dealt with according to Muslim law. No disgraceful charges shall be brought against you, and you shall not be as other [non-Muslim] poll-tax payers.

If you ask assistance, it shall be granted to you, and if you want help you shall have it. You shall not be punished for white, nor yellow, nor brown (garments), nor for a coat of mail, nor […] Not a shoe-lace of yours shall be cut. You shall not be hindered entering the mosques, nor precluded from governing Muslims.

You shall have no other ruler except out of your own midst, or from the Family of the Messenger of Allah. Room shall be made for your funerals, except when they trespass on a sacred spot (mosque). You shall be held in honor on account of your own high station and the station of Ṣafiyyah, the daughter of your uncle [who became a wife of the Prophet].

It shall be incumbent upon the people of the house of the Messenger of Allah and upon the Muslims to uphold your honor, and not to touch you. If any of you goes on a journey, he shall be under the safeguard of Allah and his Messenger. “There is no compulsion in matters of religion” [Qur’an 2:256].

The Family of the House of the Messenger of Allah and all the Muslims are charged to fulfill all that is in this letter. Whoever deserves well of Haninah and the people of Khaybar and Maqna, all the better for him; but he who does them evil, all the worse for him.

Whoever reads this my letter, or to whomever it is read, and he alters or changes anything of what is in it, upon him shall be the curse of Allah and the curse of the cursing of all humankind. He is beyond my protection and intercession on the day of Resurrection, and I am his foe. And who is my foe is the foe of Allah, and he who is the foe of Allah goes to hell […] and bad is the abode there.

The Witness is Allah, like whom there is no God, and Allah is sufficient as a witness, and his angels, and those Muslims who are present.

‘Ali, the son of Abu Talib, wrote it with his writing, while the Messenger of Allah dictated it to him, letter-for-letter, on Friday, the 3rd of Ramadan, in the year five of the hijrah.

Witnesses: [‘Ammar] b. Yasir; Salman the Persian, the friend of the Messenger of Allah; Abu Darr al-Ghiffari.

THE COVENANTS OF THE PROPHET IN CALIFORNIA

Is Sharia law coming to a city near you? 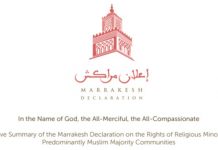